Klio is a framework for easy large-scale processing and ML research on binary files, such as audio files -- its original use case. As a matter of fact, it was developed for audio intelligence at Spotify, which open-sourced it earlier this year at the 2020 International Society for Music Information Retrieval Conference. 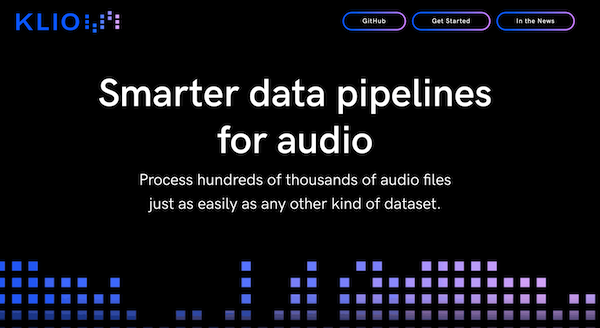 With a fast-growing catalog of more than 60 million songs, Spotify already had a tool to build data pipelines at scale: Scio (also open-source). However, its teams felt the need to process the audio itself, and not just the data attached to it; and to do so in a way that would let engineers and researchers share tooling & infrastructure and speak the same language, without a translation layer.
As a result, Klio is based on Python and Apache Beam -- because Python is arguably the lingua franca of ML, while Beam supports both batch and streaming data processing jobs that run on any execution engine. This comes with a caveat, as Python Beam and Klio aren’t fully compatible with all engines yet, but this could change in the near future (also thanks to contributors). In the meantime, Klio is already cloud-agnostic in its philosophy, and it is really its integration with the cloud that makes it so compelling, as it opens the prospect of production-ized audio processing to anyone.
While it is early to predict which use cases will emerge, it will be interesting to see it applied to different ML scenarios: “We think Klio’s ease of use — and its ability to let anyone leverage modern cloud infrastructure and tooling — has the potential to unlock new possibilities in media and ML research everywhere, from big tech companies to universities and libraries,” its (well-worth reading) announcement blog post stated.
To learn more, check out the repository, documentation, and FAQs. If you’d like to go one step further, you can also join the dedicated #klio channel in the Spotify FOSS Slack, or watch the talk that Lynn Root gave about Klio during Apache Beam Summit last August.